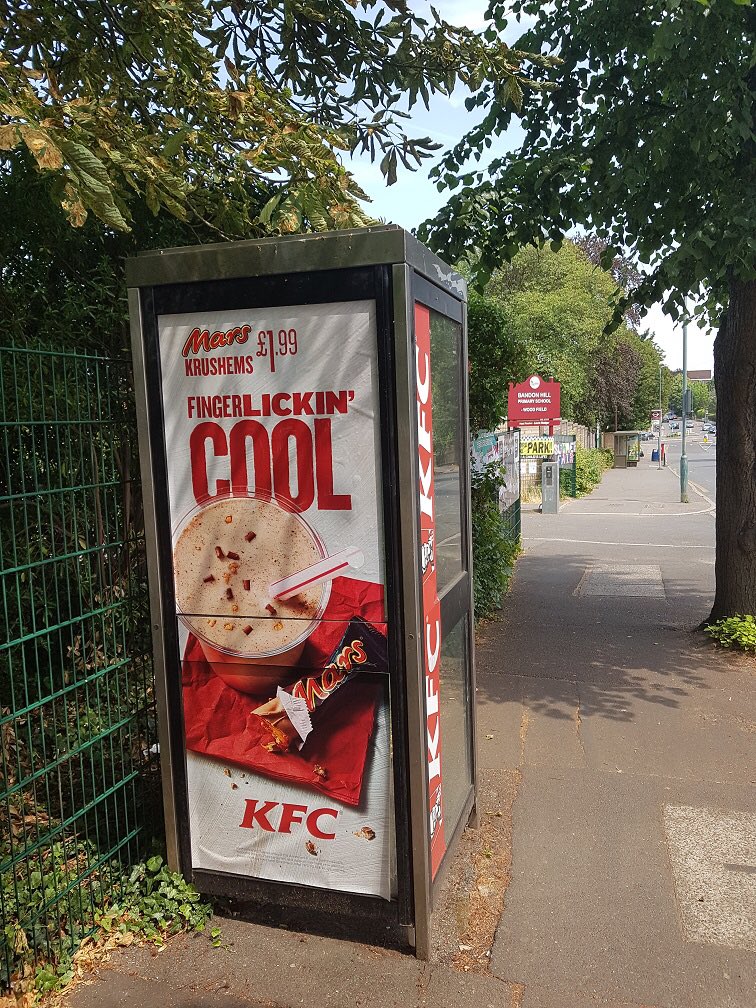 Complaints lodged by the Children’s Food Campaign and the Obesity Health Alliance, in relation to children’s exposure to unhealthy food and drink, have been upheld by the advertising watchdog the Advertising Standards Authority.

An advert for a KFC ‘Mars Krushem’ milkshake drink placed in a phone box directly outside a primary school. This fell foul of the Committee of Advertising Practice (CAP) code rule which states that adverts from products high in fat, sugar and salt should not be placed in areas where the audience is likely to be disproportionally made up of children.

KFC have responded, apologising for the error and explained that their media agency mistakenly, due to human error, selected the phone kiosk as a site for the ad. According to the fast food giant, they were unaware of the error until the ASA brought it to their attention, at which point they immediately contacted their media agency who arranged for the ad to be removed the same day.

An advert for ‘Coco Pops Granola Cereal’ shown on a children’s TV channel. The product advertised is not classed as an high in fat, sugar or salt product. However OHA argued that the advert had the effect of promoting Coco Pops cereal due to the use of branding and the character Coco the Monkey which is highly associated with the original Coco Pops cereal.

Kelloggs claimed they had taken a number of steps to use the Coco Pops brand in a responsible manner. That included reformulating Coco Pops original and introducing new non-HFSS products such as the granola to the range, and using the Coco Pops equity to introduce healthier alternatives to children and their parents through their advertising and promotions. Kelloggs also stated that they believed that if the ASA was to find that the ad had the effect of promoting an HFSS product it would reduce take-up of the granola product, would be inconsistent with the Government’s objectives on tackling unhealthy eating, and would discourage advertisers from developing healthier product alternatives.

In spite of this, the ASA concluded that the ad was in breach of current codes and banned the advert from running again.

We commend the ASA from taking this hardline stance on junk food advertisements targeted to children, particularly with regards to the Coco Pops advert. The advert may have been promoting a healthier cereal in their product line, however the use of the iconic Coco Pops monkey and the classic, high sugar variety may resonate with children.

This complaint involved a voucher printed on the back of a bus ticket, offering a £1.99 deal a Big Mac, McChicken Sandwich or Filet-O-Fish and medium fries.

McDonald’s Restaurants Ltd said they ran a number of ads on bus tickets, which were placed by an agency that was aware of the requirement that HFSS product ads must not be placed in media where more than 25% of the audience was under 16. The ad in question was displayed on the back of tickets issued on the 261 route which travelled between Uckfield and East Grinstead, operated by Compass Group. During school term-time children under 16 made up, on average, 16% of passengers on the route. Three-quarters of those children used a bus pass and so would not see the ad because they did not purchase a ticket. During term-time the proportion of children under 16 that made up passengers on the route who also saw the ad was 12% of the total number of passengers. During school holidays only 4% of passengers on the route were under 16.

McDonald’s added that the ad clearly stated that users must be 16 years or older to redeem the voucher. The complaint was investigated and the ASA ruled it was not in breach of current advertising codes.

A VOD ad for McDonald’s Happy Meals, seen in January 2018 between episodes of Peppa Pig on the VOD service Ketchup TV. The ad featured a the inconic Pokémon character Pikachu and promoted a Happy Meal box with a toy Pikachu character and trading card, a bottle of water, a portion of chicken nuggets, and a bag of pineapple.

McDonald’s Restaurants Ltd said that the items of food shown in the ad – Chicken McNuggets, a Pineapple Fruit Bag and mineral water – were not classified as HFSS and is therefore not liable to such restrictions. They also pointed out the reformulation work they had already carried out to make their products healthier and of the 22 products available in combination of Happy Meals, 16 were non-HFSS.

The complaint was investigated and ASA did not find it in breach of the current codes of advertising.

Whilst we commend the ASA for banning two HFSS adverts blatantly targeted at children, this is just the tip of the ice berg when it comes to the number of junk food ads children are exposed to through current loopholes in regulations and across all forms of media. Furthermore, it is disappointing to see that the ASA have not recognised the McDonalds adverts in breach of current codes.

In our recent survey of parents in the North West, 72% claimed they wanted restrictions on the use of toys in unhealthy children’s meals and many expressed how influential the promise of a toy can be to children. In fact, a quote from the survey details just that:

“Toys and cartoon characters are the main reason my child requests unhealthy foods. The McDonald’s Happy Meal is a marketing genius…”

Whilst the meal combination advertised in the VOD ad was not classified as HFSS, there are other options available that can move this meal into the HFSS category. In addition, we know that bottles of water and bags of pineapple are not the most popular options purchased in Happy Meal’s.

In addition, again citing the research of Boyland et al. (2015), exposure to adverts for ‘healthy’ meal bundles did not drive healthier choices in children, but does promote liking for fast HFSS food. These advertisements influence the recognition, preference and foster positive attitudes towards brands, not just the particular food and drink advertised. It’s about the whole McDonald’s experience. Furthermore, many of these complaints were lodged months ago and as the current process works on a reactive basis, many children will have been exposed to these adverts and the damage has arguably already been done.

Earlier in the summer the Government published it’s second chapter of the Childhood Obesity Plan, proposing a number of measures for consultation with stakeholders. Within the plans included a 9pm watershed on junk food marketing to children on broadcast media, and similar protection online. They also stated they would consider whether the current self-regulatory approach to online restrictions to HFSS advertising is sufficient. We support further legislation in this area and it is clear to see from these latest rulings from ASA improvements are required to ensure that children are fully protected from HFSS marketing across all forms of media.