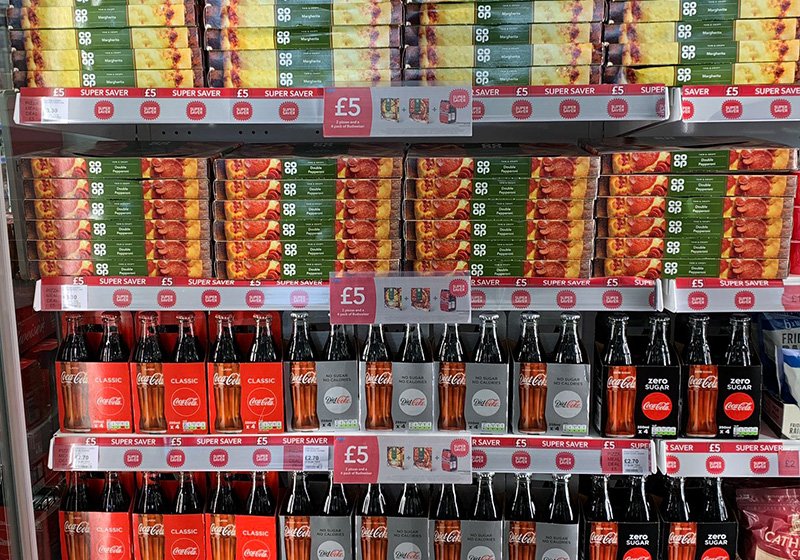 Last week marked the long-awaited return of top-flight football in England, after taking an unscheduled 3-month break following the arrival of the Covid-19 pandemic on home turf.

The Government and the Premier League were keen to emphasise that the health of participants and fans was at the forefront of their thinking. Perhaps they missed the growing evidence of the link between Covid-19 and obesity[i]

As Project Restart gave us live football without fans on our screens, a flurry of junk food marketing targeted at  the television audience of many young people as well as adults launched across a range of platforms – retailers, takeaway outlets, pitch-side banners and pretty much anywhere they could get their message..

Supermarkets wasted no time and seized the opportunity with some value-for-money deals to ‘enhance’ the viewing experience. Because you can’t watch the football without a slice of pizza and a fizzy drink in hand, right?

In this blog, we have teamed up with our sister organisation Healthy Stadia to take a closer look at some of the football-themed deals being promoted in supermarkets to fans during the first weekend of top-flight football.

Normally, the deal could cost £11.15 if you bought the items separately – a saving of over £6. What’s more, the deal is also available across 355 Co-op stores through the Deliveroo website and app so you don’t have to worry about venturing outside the house or facing long queues at the supermarket – a very appealing thought during these unprecedented times. What’s not to like?

Well, not wishing to spoil the football party, but the nutritional value of the deal is nothing to cheer about. Let’s take the pepperoni pizza – one serving (half a pizza) contains 40% of our reference nutrient intake (RNI) of saturated fat and one third of our salt intake. Wash this down with a bottle of Coca Cola, that’s all of your RNI of free sugars in one hit.

The deal itself has been heavily promoted across a range of platforms too – gaining significant media coverage, posters and displays and social media to guarantee that the offer is not missed…

“More than one reason to celebrate!”

Customers can now get two pizzas, one side and a pack of beer or Coke for just £7 in Asda to “give people a special deal to mark the return of one of our favourite sports to screens around the nation, so there’s more than one reason to celebrate” according to the supermarket’s official Pizza buyer, Georgie Gilman.

The deal means customers can save up to £6 and kick back with a cold Budweiser, a delicious cheese feast pizza and tasty mozzarella sticks – a tasty sum of 43% of our daily calorie intake, 99% of our RNI for saturated fat and almost half of our RNI for salt.

Morrisons have also got involved in promoting deals to mark the kick-off of top-flight football in England, “delivering the first pies and pints just in time ready for the big match kick-off between Arsenal and Man City” claims Senior Buying Manager, Tim Cullum.

The supermarket has teamed up with Deliveroo to offer hand-picked “Matchday special” bundles to football fans featuring stadium favourites such as burgers, pies, crisps and chips as well as beer and cider, delivered to their door within a guaranteed 30 minutes. Pie, chips and a pint will score you almost 1,000kcals and half of your RNI of saturated fat.

With the games coming thick and fast, we are concerned about the type of food and drink being promoted to the public. Foods that we have seen are high in fat, sugar and/or salt – all nutrients that we are already exceeding the RNI for – and not a portion of fruit or vegetables in sight.

Given the current Covid-19 pandemic, it is inappropriate for the food industry to be promoting their unhealthy products using football which should surely be about promoting health and fitness. As the links between obesity and Covid-19 continue to grow[iii], the Government should consider introducing restrictions on the promotion of less healthy food and drink in supermarkets. Proposals which the Government have already consulted on back in 2019. The Prime Minister has already expressed his interest in a more interventionist approach to reducing the prevalence of obesity, and we believe action on promotions and advertising play an important part in addressing the problem.

It’s not just supermarkets who have been exploiting the start of the Premier League to promote unhealthy food and drink to the public – takeaway and fast food outlets and delivery platforms have also been getting in on the action. Read our sister organisation Healthy Stadia’s blog here to find out more about these deals.

This article has been jointly produced by Healthy Stadia and Food Active – co-authored by Michael Viggars, Beth Bradshaw and Robin Ireland.