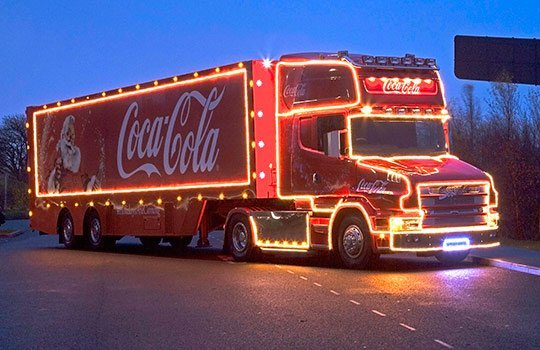 Food Active are delighted to be published in today’s BMJ. Please find the press release below.

Coca-Cola’s “Happy Holidays” truck tour should be banned, given the growing evidence of the effect that marketing of unhealthy food and drink has on children, say public health experts in The BMJ today.

In 2018, the UK government will introduce an industry levy on full sugar soft drinks as part of its childhood obesity strategy.

This Christmas the truck visited five locations in north west England in the first week of December and received substantial coverage in the major local newspapers in Liverpool and Manchester.

Visitors could have their photo taken with the vehicle while being given free product (including a 150 ml can of standard Coca-Cola containing 15.9 g of sugar – nearly four teaspoons).

But Robin Ireland, Director of Food Active – a campaign based in north west England to tackle increasing obesity levels – points out that 34% of 10 to 11 year olds in the north west are overweight or obese and 33% of 5 year olds have tooth decay, largely down to their consumption of sugary drinks.

Many public health departments have launched campaigns about sugary drinks to try to help their communities reduce their consumption, so Coca-Cola’s campaign was scarcely welcomed by local directors of public health, medical professionals, educationalists, or indeed members of the public, he adds.

Such was their concern that Food Active organised a letter stating “We can celebrate without allowing Coca-Cola to hijack Christmas by bringing false gifts of bad teeth and weight problems to our children.”

The 108 signatories included five public health directors and the current and past presidents of the Faculty of Public Health. The letter received no coverage in either Liverpool or Manchester.

“It is of huge concern that no alternative views were provided in the face of a concerted commercial marketing campaign by Coca-Cola, writes Ireland. “Apparently Coca-Cola’s voice counts more than those of directors of public health.”

He believes that this form of advertising and marketing should be banned and will continue to push for national action to stop similar campaigns next Christmas.

You can view the full article here: Happy corporate holidays from Coca-Cola_BMJ