Caught Out! Advertising watchdog bans junk food adverts for The Hundred from KP Snacks and England & Wales Cricket Board 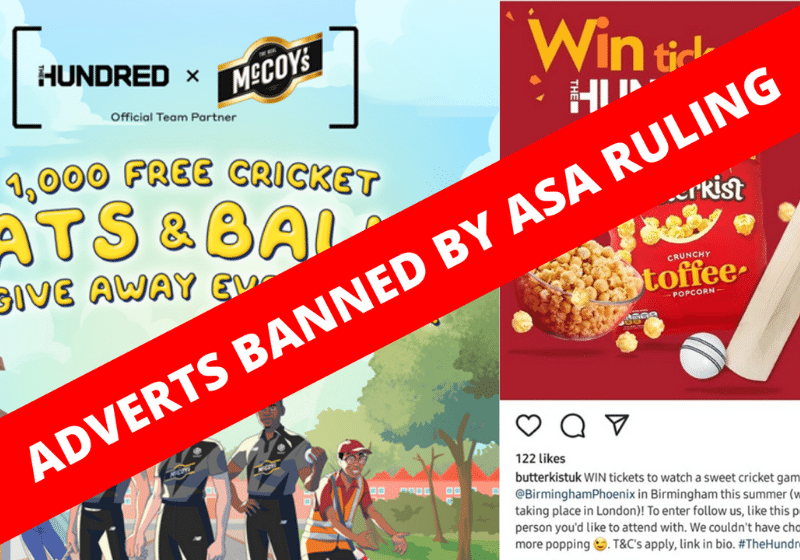 13 Apr 2022 Caught Out! Advertising watchdog bans junk food adverts for The Hundred from KP Snacks and England & Wales Cricket Board

Today the Advertising Standards Authority have ruled that The English & Welsh Cricket Board & KP Snacks broke rules designed to protect children from advertising food and drink high in fat, salt and/or sugar (HFSS), as part of the inaugural ‘The Hundred’ tournament last summer.

The ruling, which took seven months to come to a decision, judged that under-16s following the family cricket tournament The Hundred were exposed to emails from KP Snacks linked to a heavily junk food branded website, and an Instagram advert promoting Butterkist.

The Advertising Standards Authority (ASA) has upheld part of a complaint by the Children’s Food Campaign and Food Active about sponsorship advertising by KP Snacks as part of the family-friendly cricket tournament The Hundred. According to rules established by the industry self-regulator, the Committee for Advertising Practices (CAP), companies are banned from advertising food or drink high in fat, salt or sugar (HFSS) directly to under-16s.

The organisations alerted the watchdog to a series of marketing activities carrying KP Snacks logos including Butterkist, McCoy’s crisps, KP Nuts, Hula Hoops as part of the sponsorship deal with England & Wales Cricket Board (ECB) tournament The Hundred during August 2021. They included emails, social media posts and a dedicated “Everyone In” website with activities featuring snack-branded cartoon cricket players, linked to KP Snacks’ web pages.

The ASA’s investigation revealed that under-16s had received an email encouraging recipients to enter competitions to win KP Snacks branded cricket balls, via a KP Snacks owned website advertising several of their products. The watchdog also found that KP Snacks had not done enough to protect under-16s being exposed to an Instagram post featuring Butterkist popcorn, which contains 51g sugar per 100g – with one 30g portion containing 15g which is half the daily maximum sugar intake for an adult (or two thirds of maximum recommended for 7-10 year olds).

“KP Snacks and the ECB have been caught out this time. We’re glad the ASA has told them very clearly to be more responsible in ensuring their marketing does not target children in future.

However, it’s taken seven months to reach this verdict, which didn’t stop any junk food advertising at the time of the tournament, whilst neither body is facing any penalties or fines for breaking the rules.

This is why we urgently need the more powerful new food and drink advertising restrictions contained in the Health and Social Care Bill. We are also calling on Government to go further and kick junk food sponsorship out of sport altogether – our research shows 9 in 10 parents think these partnerships are inappropriate. This case clearly shows that simply asking sports organisations to be responsible in their commercial partnerships is not working, and there needs to be a level playing field for all, and for our children’s health.”

“Preparations are well underway for The Hundred 2022 with the Men’s and Women’s teams draft taking place just last week, attracting some international super stars in the cricketing world such as Jemimah Rodrigues, Keiron Pollard and Rashid Khan.

So, we are really pleased to see this ruling announced now by the ASA, which will help to protect more children from inappropriate marketing of HFSS products whilst they are simply trying to watch cricket in this year’s upcoming tournament. Parents we spoke to last year in our ‘Kicking Out Junk Food’ report agreed that associating less healthy food and drink products with sport is unhelpful, and that the Government should do more to tackle junk food being part and parcel of watching sport.

What is crystal clear from this ruling is that the current advertising codes on HFSS products are not fit for purpose and do not protect children’s health. Time and time again we see that the food industry cannot be trusted to abide by advertising codes so stronger restrictions on blatant marketing of HFSS products to children are absolutely warranted.”

The adverts banned under this ruling are shown below 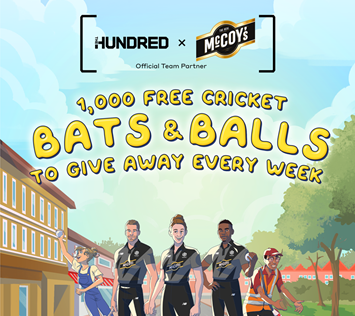 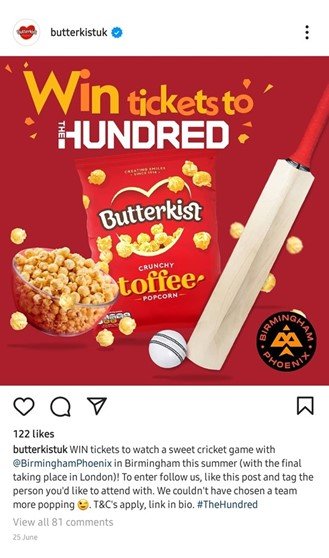 In November 2021, the Children’s Food Campaign and Food Active’s report Kicking Junk Food Out of Sport contained research with 346 parents across the UK which revealed that:

The report included a series of recommendations for healthier partnerships between the sports industry and the food and drink sector including:

The Children’s Food Campaign and Food Active lodged complaints about KP Snacks advertising as part of ECB’s The Hundred in August 2021. The ASA’s April 2022 Council upheld the complaint with regard to the email campaign and an Instagram post but ruled against other aspects of the complaint including the promotional Everyone’s In website and other social media posts. The adverts were uncovered during research for the report Kicking Out Junk Food, which explores the relationship between the sports sector and the food and drink industry, published in November 2021. The report contains a case study covering the relationship between the ECB and KP Snacks on p.29-31, which is also available for journalists separately. The ruling can be found here.

About the Children’s Food Campaign

Children’s Food Campaign (CFC) is part of the charity Sustain: the alliance for better food and farming. CFC aims to improve children and young people’s health by campaigning for policy changes in schools, communities, the food industry and throughout society that promote healthy and sustainable food environments. Children’s Food Campaign is supported by over 100 UK-wide and national organisations, including children’s and health charities and professional bodies, trade unions, school food experts and environmental organisations. www.childrensfood.org.uk

Food Active is a healthy weight programme of work originally based in the North West of England, delivered by the public health charity the Health Equalities Group. The programme aims to address the environmental, social, economic and legislative factors that influence people’s lifestyle choices and behaviours. To achieve this, we take three approaches: