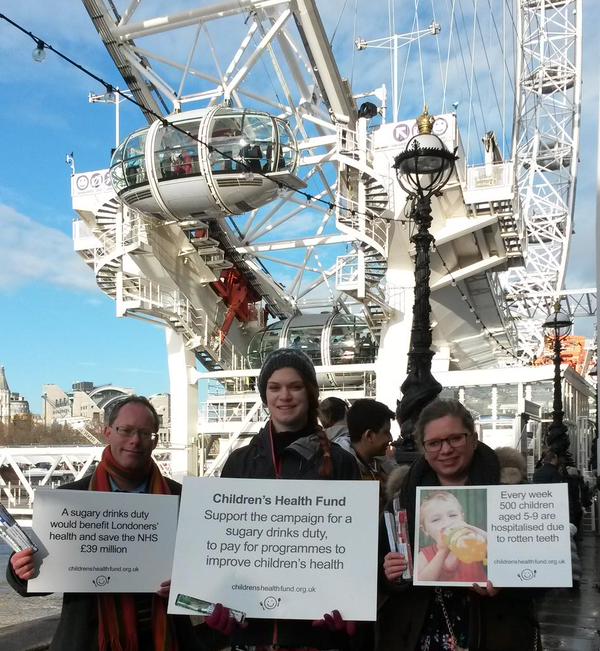 Our colleagues at the Children’s Food Campaign have marked the recent start of Coca Cola’s sponsorship of the London Eye with a ‘welcoming party’, handing out over 500 toothbrushes to some of the first visitors to the re-branded tourist attraction.

“Soft drinks are the largest single source of sugar in children and teenagers’ diets. Every week, almost 500 children aged 5-9 are hospitalised due to rotten teeth. That is why we are handing out 500 toothbrushes outside the Coca Cola London Eye.”

“We believe it is inappropriate for a major family attraction such as the London Eye to be sponsored by a sugary drinks company. It sends completely the wrong message not just to children and their parents here in London, but- given the Eye’s worldwide recognition and visitor profile- right across the globe.”

“A 20 pence per litre duty on sugary drinks would reduce sugar consumption, leading to improved health and quality of life for many thousands of people, and would save the NHS £39 million in the capital alone. We are calling for the Government to follow France, Mexico and Hungary’s lead  and introduce a sugary drinks duty. The money raised could be used to set up a Children’s Health Fund, to pay for programmes to improve children’s health and protect the environment they grow up in.”