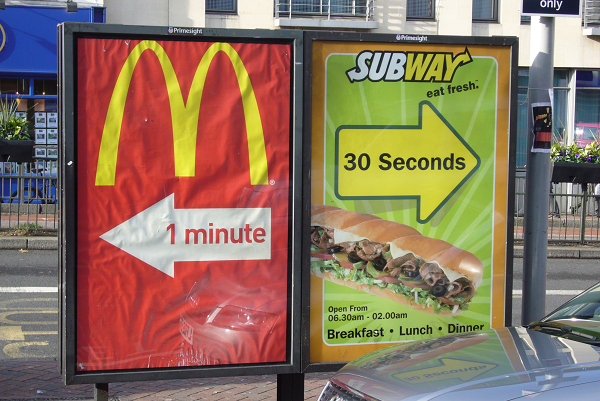 Powers to ban junk food advertising near schools, nurseries and children’s centres should be given to councils in a bid to beat the childhood obesity crisis, say town halls.

The Local Government Association (LGA), which represents more than 370 councils – with responsibility for public health – says the move would reduce children’s exposure to unhealthy food and drinks high in salt, fat and sugar, said to be a key driver behind childhood obesity.

Three and a half million children are obese – one in five 10 and 11-year-olds and one in 10 four and five-year-olds – according to latest figures. Obesity in children can lead to a higher risk of major health problems such as diabetes, cancer and heart disease.

The call comes ahead of the LGA’s conference today (Thursday, 17 March) on childhood obesity, while the Committee of Advertising Practice is also set to launch a public consultation on whether to ban junk food advertising to children online, in the press, on billboards and poster sites.

If the Government granted councils these powers, they would have the freedom to control the advertising of junk food and sugary drinks if they felt it was an issue that needed tackling in their area. Under the current system, councils have to apply to the Secretary of State, followed by a period of consultation before a decision is reached.

“We urgently need to take action to tackle child obesity, and giving councils powers to control marketing of junk food, which is one of the major causes of this epidemic, will help us to tackle the issue.

“We need to make changes to our environment if we are to fight obesity, and although this won’t solve the obesity crisis by itself, being able to limit children’s exposure to unhealthy food products would be an important step forward.

“It is not right when we are trying to educate children around the importance of maintaining a healthy diet, that at the same time they are subjected to a bombardment of junk food advertising.”

Blackpool Council is the first in the country to sign up to Food Active’s Local Authority Declaration on Healthy Weight, which includes supporting the Government to introduce a sugary drinks duty, improved spatial planning measures in addition to pledging to protect children from inappropriate marketing by the food and drink industry.

In Blackpool, obesity rates are higher than the national average with a quarter of reception-age school children overweight – 2,600 pupils – compared to a fifth nationally, while more than a third of 11-year-olds in the town are obese or overweight.

The declaration on healthy weight is a joint strategy with other councils in the North West to tackle obesity, which is calling for stronger national controls on junk food marketing.

“Congratulations to Blackpool Council for taking this stand. The link between the number of junk food adverts both on and offline and the prevalence of obesity is growing stronger. More needs to be done to combat junk-food-filled environments in which we live, work and study.

“We all know how difficult it is to maintain a healthy weight and I am delighted to see Blackpool Council is doing everything they can to help their residents eat healthier and take more exercise.

“I hope other councils in the North West and across the country will now follow Blackpool’s example.”

If you would like to learn more about developing your own Local Authority Declaration on Healthy Weight, please contact nicola.calder@hegroup.org.uk  or call us on 0151 237 2686 for more information.