Guest Blog for National Cholesterol Month: Discordant LDL – a discord from dietary guidance? Or a concord of hypothesis?

Home > Blog  > Guest Blog for National Cholesterol Month: Discordant LDL – a discord from dietary guidance? Or a concord of hypothesis? 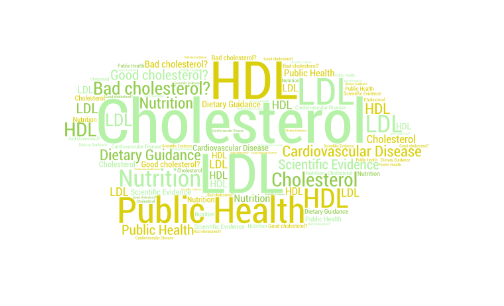 27 Oct 2017 Guest Blog for National Cholesterol Month: Discordant LDL – a discord from dietary guidance? Or a concord of hypothesis?

Cardiovascular disease (CVD) is a major public health concern, and one of the largest killers in the UK. The major biochemical and modifiable CVD risk factor, which has been at the forefront of guidelines for a good number of decades, is low-density lipoprotein cholesterol (LDL-C). LDL-C is associated with a number of factors but the most dietary relevant and rather controversial (as we shall see) are saturated fatty acids (SFA). The diet-lipid-heart hypothesis (Figure 1) is the basis of why worldwide, dietary guidelines, including those in the UK, limit intake of saturated fatty acids. This hypothesis is based upon two principles, 1. SFA increase LDL-C, and 2. LDL-C increases CVD risk. Questioned numerous times since its beginnings in the 1960’s, this blog article aims to provide some insight on why this hypothesis may be important in some cases and less for others. Warning, it gets complicated!

Before we move on to the interesting part, it is important to understand what LDL-C is. Cholesterol is carried around the blood by particles called lipoproteins. The low density lipoprotein (LDL) particle transports cholesterol to our tissues, where the cholesterol is used to manufacture products essential for our body, such as bile, steroid hormones, vitamin D, and cell membranes. Unfortunately, high levels of this useful particle have been associated with CVD and because of this it has now been lumbered with the rather unflattering term of ‘bad cholesterol’. The term ‘bad’ is a misnomer really; cholesterol is not bad or good, rather risk is associated with the type and number of particles that transport it. LDL particles are involved in the process of atherosclerotic plaque development (narrowing of arteries) and hence heart disease – recently, the LDL particle was given causal status for CVD1.  As we will see shortly, the LDL particle and LDL cholesterol are not always interchangeable terms.  Now for the definition: LDL is a spherical particle with one molecule of a protein called ApoB 100 embedded in its membrane, and a centre containing cholesterol and fat called triglycerides. LDL can come in a variety of sizes from large and buoyant LDL to small and dense LDL (Figure 2). Importantly as there is only one molecule of ApoB 100 we can effectively count the number of LDL particles – referred to as LDL-P (Figure 2).

Figure 2. LDL size, discordance and CVD risk. LDL I – III represent large buoyant, medium density, and small dense LDL respectively. CVD risk is more dependent on particle number when there is discordance. When particle number and LDL-C are concordant, LDL-C is a good predictor of CVD. CE = cholesteryl ester, TG = triglyceride. This is kind of like bags of potatoes. A bag of baking potatoes may contain 4 potatoes, but a bag of new potatoes may contain 20 but the bag weighs the same.

Now for some interesting evidence, which is partly counter to the lipid-heart hypothesis (stage 2). Figure 2 shows us which type of particles are the highest risk and how the cholesterol within a type of LDL can either be discordant or concordant with the number of particles (LDL-P).  This is important as the lowest risk actually has the highest LDL cholesterol; this opposes the lipid-heart hypothesis. However, this only occurs in about 10% of a total population2. This particular type of LDL are very rich in cholesterol but low in ApoB 100, remember there is only one particle per LDL – therefore low ApoB means  fewer circulating particles; these LDL are categorised as large and buoyant LDL I (Figure 2). Evidence shows discordant LDL I cholesterol is less of a concern for CVD risk even when the cholesterol component is elevated3. However, with discordant small, dense LDL risk increases with high LDL-P despite low LDL-C2; however, when LDL-C does increases in this category the risk is exerbated3.  With respect to concordant medium LDL II, both LDL-C and LDL-P increase risk in tandem2. Therefore, risk with concordant LDL is concordant with the lipid-heart hypothesis, whereas discordant LDL only partially agrees.

We’re now left with the question: we’re does diet, especially saturated fatty acids, fit into this complicated, I prefer interesting, conundrum? Ok here goes my explanation, the majority of a population will tend to have a concordant LDL with predominantly LDL II (80%)2. Within a given population, LDL-C may be raised (above 2.6 mmol/L) in about 60%, which tracks with LDL-P – various worldwide associations state LDL-C should be lower than this number4. Traditional dietary guidelines suggest limiting saturated fatty acids will reduce LDL cholesterol; if the LDL-C lowering is in agreement with a similar lowering of LDL-P then CVD risk should be reduced. Hope you are still following, I know it’s a bit of a brain teaser this lipid stuff.

So, what does the research say? In my search for a meta-analysis (a study of studies, and considered the pinnacle of research reviews) for LDL-P and SFA I came up with nothing, so I tried ApoB and found no meta-analysis and nothing to do with diet! Ok time to look at the major studies that have analysed the complexity of LDL. There are more out there, but one of the most relevant was the PREDIMED study5 – this is a very large study testing the Mediterranean diet, which tracked the participants after the intervention to see the rate of CVD – rare and expensive type of study. PREDIMED was a Mediterranean-style diet with either increased nuts or olive oil. In a subsample of 169 participants with increased CVD risk but not characterised by their LDL (Figure 2),  the nuts arm (30 g per day) reduced small, dense LDL particle numbers and increased large buoyant LDL.  Therefore, CVD risk from a Mediterranean dietary pattern is reduced by a shift towards large and buoyant LDL and less circulating LDL particles. Great, risk reduced and actually tallies with actual CVD rather than relying solely on blood markers. So does this verify stage 1 of the diet-lipid-heart-hypothesis? Well, no! PREDIMED did not reduced SFA, rather increased unsaturated fats and the diet was rich in fish, fruits and vegetables, wholegrains etc but limited in sweets, which all could have contributed to the benefits. Ok I’ll try a different approach, do SFA increase LDL-P? The answer to this one is ‘yes’ and ‘no’, or I suppose ‘it depends’ is better.  From the stable of Ronald Krauss, prolific in this area, two studies come to mind. The first one6, published this year, participants with high risk small, dense LDL (Figure 2) were given either a high SFA diet, or a low SFA diet – all other macronutrients equal and interestingly carbohydrates just under 40% of total energy.  The high SFA diet increased total, medium and small LDL-P and LDL-C, therefore supporting the lipid-diet-heart hypothesis from the LDL-C point of view and also increasing high risk LDL-P suggesting SFA is bad news from two angles. The other study from Krauss, which was similar in design (i.e. high in SFA) but this time lower in carbohydrate7 (26% energy); in contradiction to the first study the results showed a reduction of small LDL-P and ApoB therefore reducing CVD risk – importantly, this was in a normal LDL sample, not those with small, dense LDL.  From this evidence you can see where the ‘it depends’ comes in, if carbohydrates are low enough then the more risky particles are reduced in those with normal LDL. What about individuals with small, dense LDL? We’ve seen that high SFA with ~ 40% carbohydrate can increase small, dense LDL particles6 and therefore risk. The question now begs, for this group, should you reduce SFA or carbohydrate?   Further carbohydrate restriction to < 10% of total energy intake can also induce favourable changes in lipoproteins, indeed it appears to be the lower the carbohydrate the greater increase in large buoyant LDL8. My current opinion on reducing SFA as the other option depends on carbohydrate intake: if carbohydrates remain above 26% then it would be a good idea to reduce SFA to avoid increases in high risk LDL particles as seen in the above study6.

LDL comes in a variety of, I’d like to say shapes and sizes, but sizes and numbers will do. The most harmful appear to be large numbers of small, dense LDL (sdLDL-P), but not necessarily high LDL-C2 (Figure 2). While a Mediterranean diet has been shown to reduce CVD and overall mortality9, and a nuts based version shown to reduce sdLDL-P, this is not the only way to reduce risk. There is more than one way to skin a cat, or crack a nut! The Mediterranean diet is certainly an option but it may not be optimum for those with high levels of sdLDL-P unless carbohydrates are restricted. For this group, lower carbohydrate diets may be superior, as the lower in carbohydrate one goes the greater increase of large buoyant LDL. However, before attempting any kind of dietary modification, monitoring and guidance from a medical practitioner is always recommended. Despite benefits, the low carbohydrate approach may not be for everyone and if carbohydrates are higher than 26% then limiting SFA might make sense. Finally, this discussion also needs to bring into play several other lipid players, types of saturated fatty acids from different foods, oily fish/fish oil, the quality of carbohydrates, markers of insulin resistance and inflammation, genetics, other lifestyle factors, personal choice, and adherence to non-cultural norm diets, and a more personalised approach to nutrition for a more complete story – but we’ll leave that for another time.