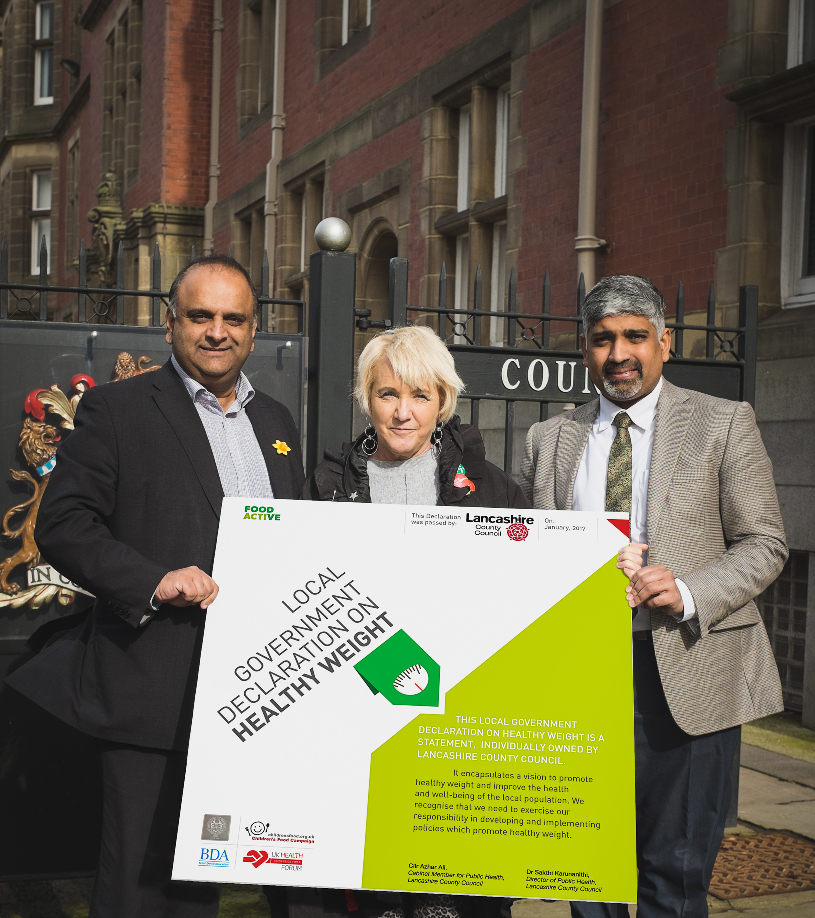 Lancashire is one of the larger higher tier Local Authorities in England covering 12 District Local Council footprints with a mid-year 2016 population of 1,198,800. Overall, the percentage of overweight and obese adults is higher than the national average, with significantly higher rates in Wyre, Fylde, Rossendale and Chorley. According to the National Child Measurement Programme for 2015/16, 22.5% of reception children are overweight or obese and in year 6 (age 10/11) its 33.2%.

In January 2017, Lancashire County Council adopted the Healthy Weight Declaration with upstream and practical support from the Food Active team. Over some period of time they worked with our Director of Public Health, council departments and Councillors to start meaningful conversations about challenging unhealthy weight. The development of the Healthy Weight declaration offered opportunities for early dialogue with the providers of our Active Lives Healthy Weight commission in a population based approach alongside other interested parties. This was achieved through workshops and presentations on for example the detrimental role of sugar in diet and the sugar industry.

There are limitations on the Authority in terms of committing further spend on interventions to promote healthy weight given shrinking budgets. Promoting a Healthy Weight Declaration was seen as an option to keep population weight concerns high on the Local Authority agenda. Notwithstanding the good work that had already begun and taken hold with Lancashire food and catering providers, they had already been awarded a prestigious silver Food for Life Catering mark for the food provided in Lancashire County Council schools and residential care, it was acknowledged that more could be done in other areas of the food economy.

Timing was good for adoption of the Declaration; elections were looming and there was some ground swell in the importance of food and health in council discussions, there was an opportunity for sharing good practice and making sure that the public saw that there were some positive steps on developing this agenda which also coincided with the Public Health England campaign to be ‘Food Smart’.

We weren’t reinventing the wheel, there was lots to learn from our near neighbours through Blackpool Councils adoption of the Healthy Weight declaration in the previous year, in which there was a particular emphasis on dental health as well as obesity which we took on board in our local discussions.

The Healthy Weight Declaration was based on the core work developed by Food Active with additional commitments in line with ameliorating food poverty, food growing and supporting health weight in schools. We now look forward to implementing a plan that extends and builds on the interest already shown by our district councils; that develops a healthier workforce and also encourages and gathers momentum into developing a Healthier Lancashire.