Guest Blog: Walking – why we should do more, often don’t, and what the government can do to help.

Home > Active Travel  > Guest Blog: Walking – why we should do more, often don’t, and what the government can do to help. 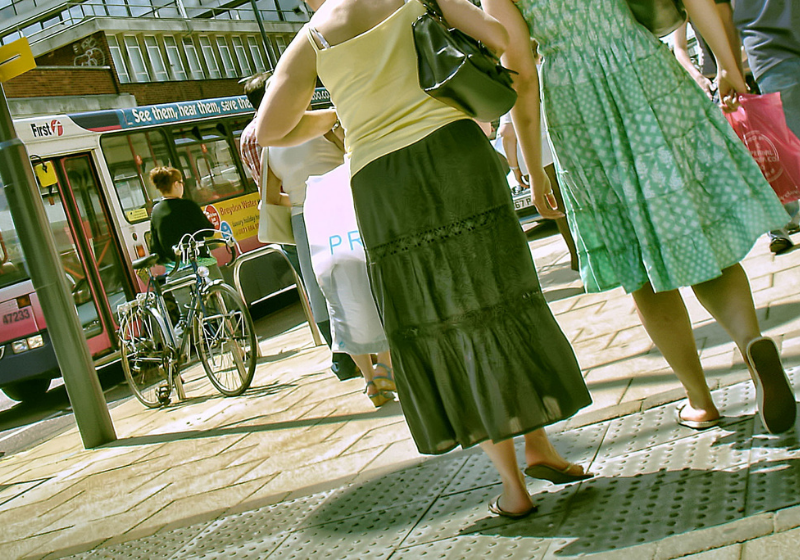 We welcome in 2021 with a guest blog from Dr Rob Noonan of the University of Liverpool, to discuss some of the barriers that prevent us from walking more – and ultimately what the Government can do to support us to get our walking shoes on.

It’s been known for some time that physical activity is good for us. Some of the earliest scientific evidence of the protective value of physical activity was published almost 70 years ago by Jerry Morris and compared bus drivers with bus conductors and desk-based workers with postmen in the postal service.

For most people, the easiest and most convenient forms of physical activity that can be maintained in the long run are those that can be incorporated into everyday life – like walking.

Walking is free. It can be undertaken around the house, at work, as a form of transport and during leisure time – either alone or with friends and family. Not having the right equipment and not being able to access leisure facilities are barriers to exercise and most sports but not walking – few resources are needed just some comfortable footwear.

Walking expends energy regardless of the pace and distance people walk – so, it’s an effective way to regulate energy balance. Walking is also positively related to cardiovascular health. It’s not just the physical benefits walking brings either. When we walk, our brain slows down which gives us time to think, clear the mind, and tap into our creative selves. Some of our best ideas and memories come to light when we’re out and about walking. Walking in nature can bring even more health benefits.

Walking like all other human behaviour is influenced by cultural and environmental factors. Walking levels tend to vary quite a lot across countries not because some countries have the “walking gene” and others don’t. It’s because the way of life and the environments that people are exposed to differ in different countries.

There’s no mistaking that industrialisation and the development of labour-saving devices have increased productivity and prosperity and bettered human health. The thing is, they’ve also made for a more sedentary, yet faster and stressful pace of life, with greater time pressures for us all. These time pressures fuel the need and desire for people to do things faster and get places faster too.

Nowadays few jobs require physical labour and around the house pretty much all chores can be taken care of with the flick of a switch. Not only has the growth of cities resulted in people working and shopping further from home, it’s also forced them into using motorised rather than active forms of transport to overcome their longer commutes. The average daily work commute in the UK is now around 1 hour.

Aside from nudging millions of people towards inactivity, the dispersed city has exposed us all to poorer quality air and traffic related injuries, and placed a financial burden on us too. Not only do we work more hours to be able to afford to drive the cars we like – we do so to pay for the leisure facilities that we use for exercise that could be the side-effect of our daily active commutes.

In wealthy countries like the UK where there’s an expectation that time is used constructively and not “wasted” this can lead to negative cultural assumptions about rest and play as well as slower ways of travel, like walking.

When people drive to the gym, park next to the entrance, take the lift to the gym floor to then walk on the treadmill – they’re not thinking about the health, economic or environmental costs. It’s the time saving, immediate convenience, privacy and comfort that driving to the gym gives [over walking and public transport] which take precedent over the longer-term consequences.

There’s also the issue of car culture. Cars symbolise identity and hold far more status over walking as a means of transport. Larger, more luxurious cars like SUV’s carry higher status than smaller cars and people strive to own them, and be seen driving them, even at the gym. Sales of these larger cars continue to rise even though they pollute more than smaller cars and contribute to many more pedestrian and driver deaths.

What can the government do?

Regulatory reform is a country’s most powerful mechanism to change culture and health behaviour. The ban on smoking in public spaces, seat belt use in motor vehicles, vaccinations against infectious diseases and sanitary reform in the Victorian era are just some of the great public health achievements of the past. Reducing car dependency could be the next big public health advance.

In the UK, everyone is exposed to a dispersed car dependent environment. The way people respond to distance is predictable. Most people will walk to a corner shop if it’s less than half a mile away. If it’s further away they generally won’t. They’ll drive. For people living in the suburbs, owning a car is now in many ways a precondition for social inclusion. It’s an absolute need for them.

Land-use policies shape the way neighbourhoods are built and the way people travel. Walkable mixed-use neighbourhoods that feature a variety of uses and locate stores, jobs, schools and transit stations within walking distance of where people live, reduce people’s reliance on needing and using a car.

Mixed-use neighbourhoods are also a good way to maintain neighbourhood safety. Evidence shows that when other people are present in public spaces people feel safer as there’s more eyes on the street, and the greater footfall can stimulate social cohesion and social capital.

Another way to incentivise people to walk more is to slow down vehicle speeds on roads. Local councils have the powers to lower speed limits in residential areas to 20mph – we know that these policy measures reduce pedestrian casualties, especially among children.

Policies like this don’t just make neighbourhoods feel more walkable and safer for walkers either, they discourage people from believing that the car will get them from A to B quicker than other modes of transport like the bus or train.

However, for these policies to work – for people to reduce their reliance on the car – there’s a need for complementary transport policies that make it easy for people to access public transport by foot and get from A to B just as quick as the car.

It’s also about ensuring driver costs reflect the impact caused to pedestrians, cyclists and wider society. Currently the car tax system in the UK doesn’t reflect the fact that it’s not cars themselves that are the problem but rather car trips. Driver’s aren’t incentivised to drive less.

In the UK drivers pay a one-off tax fee each year regardless of the number of trips they make and the distance they travel. Aside from fuel costs, financially, you might as well drive and drive. And this is what lots of drivers do. The focus instead should be on the marginal costs – the price drivers pay for one extra trip.

Externality charges are an effective way of incentivising drivers to first consider the inconvenience they cause to others, and second, where possible, switch to other modes of travel. Take the London congestion charge for example. Following its introduction private car use in the city fell and there was less congestion on the streets with commuters switching their mode of travel to bike or public transport.

The UK Government are currently considering implementing additional externality charges to road users such as road pricing and clean air zone schemes which is a promising step forward.

The car is by far the most advertised commodity in rich countries which normalises driving in these countries, making it a normal part of everyday life, even for the shortest of journeys. Because of this, walking has ceased to exist as an everyday normal activity for the masses and has become a sort of “exercise” that public health agencies struggle to effectively promote.

Any government campaign to reduce car use in favour of walking would most definitely be lobbied against by the big car and oil companies who have huge locked in capital and enormous advertising and marketing budgets that dwarf public health campaigns. In reality though, these companies are far more likely to receive government protection than challenge because of the central role they play in the world economy. For example, national oil companies control over $3 trillion in assets and produce almost all of the world’s oil and gas.

Let’s say that the government were to run a campaign encouraging the public to walk more and drive less, and car companies were to stop their advertising and lobbying for car-centric infrastructure, would the public still have a strong preference for their modern suburban lifestyles? The lifestyles that symbolise individualism, status and productivity and necessitate car use. Probably.

So, while we do need better walking infrastructure in the UK – walking more often is equally as much about people slowing down. It’s about cultural change. A short visit to contrasting cities like New York and Copenhagen illustrates just how much culture dictates the pace of life and way people travel.

Because governments set the incentives for society’s behaviour – the only answer to get people driving less and walking more is through regulation. Until the government prevented people from travelling around unnecessarily to reduce the spread of the Covid-19 virus – most people have tended to ignore their advice to drive less.

The Nobel Prize winner for economics, Milton Friedman, famously said that “Only a crisis – actual or perceived – produces real change”. The year 2020 has been a year of crisis and indeed great change. A lot of people slowed down and struck a better work life balance during lockdown allowing them to reconnect with their surroundings more.

If ever there was an opportunity to entrench walking into our daily lives, and shift society to a more active and sustainable one, this must be it!

Dr Rob Noonan is a Lecturer at the University of Liverpool.