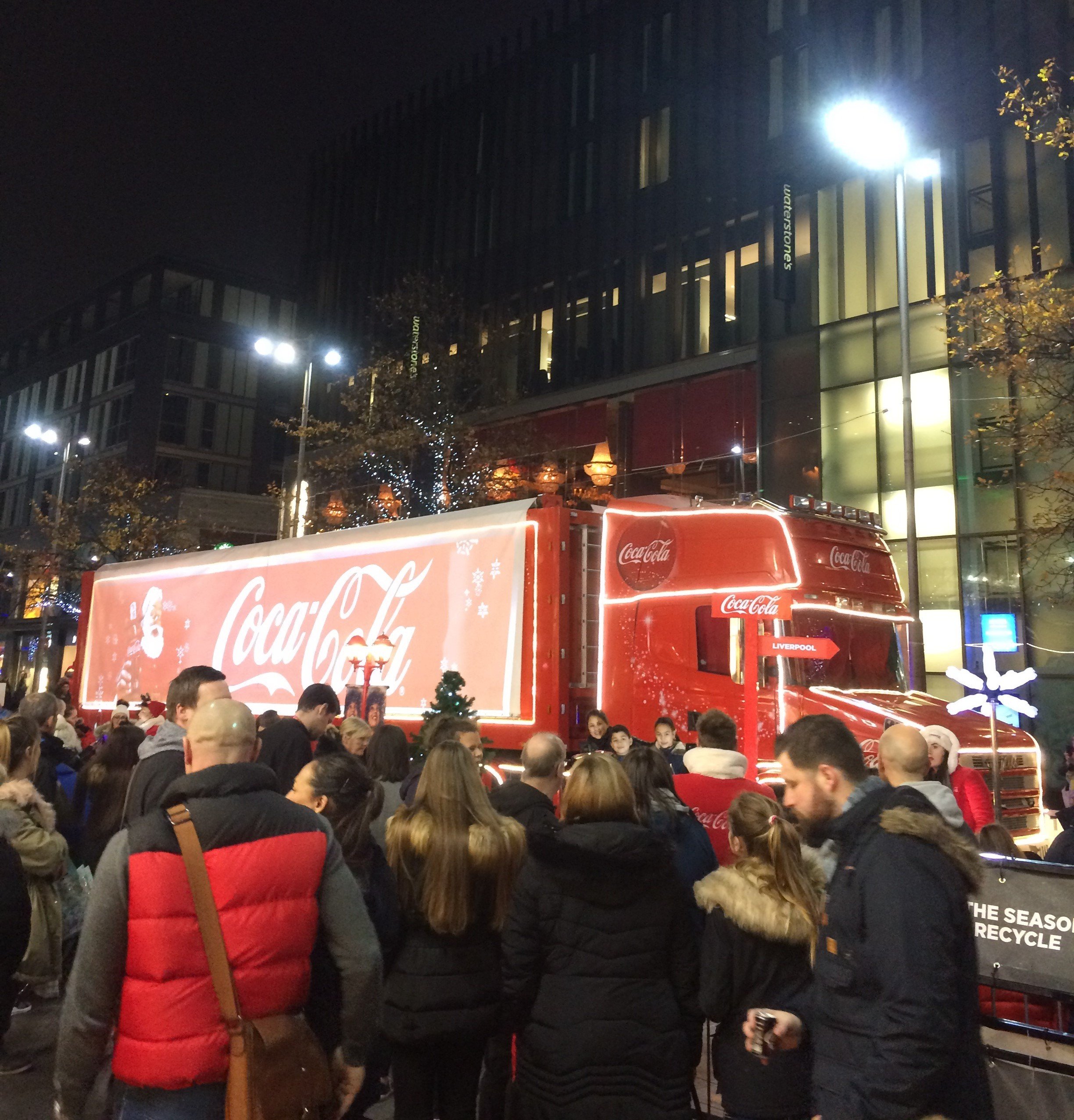 Food Active are sorry to report that the Coca Cola signature “Happy Holidays” truck will once again be visiting the North West this festive period, on a total of 6 occasions…

30th November in Bolton, 2nd/3rd at Manchester’s Trafford Centre, 1st December in St Helens and 5th/6th December in Liverpool One. The announcement of the tour also ironically coincided with Sugar Awareness Week from Action on Sugar.

The truck has already made tracks through Glasgow last weekend and today Coca Cola will be in Newcastle handing out high sugar drinks to the community and – a city already with levels of childhood obesity over 4% greater than the national average.

Yet again we are faced with the arrival of this large scale junk food marketing stunt over the festive period, exploiting the Christmas spirit for commercial gain. Coca Cola is using this marketing platform to promote their high sugar products thereby further perpetuating the poor state of oral health in children, unhealthy dietary habits and long term health consequences thereby placing a further burden on the already fragile NHS.

In just one 150ml can of the classic Coca Cola handed out contains 15.9g of free sugars – that’s;

All that sugar in just one small can – a few mouthfuls even.

Whilst Coca Cola will also have on offer two zero sugar versions, the logo displayed on the truck and prominent colours of this marketing stunt both refer to the option with the highest sugar content – which is sure to resonate with children in particular.

However, the truck’s arrival hit the news days before the tour was even confirmed – with Liverpool Lib Dem leader Cllr Richard Kemp (also Lib Dem Spokesperson at the Local Government Association on Social Care and Health) writing to bosses in L1 to argue the case against hosting the truck this Christmas, describing Liverpool to be in the “grip of an obesity epidemic” and “[The Coca Cola truck] is not designed to welcome Christmas but to increase the consumption of a product that is grossly unhealthy” as reported in the Liverpool Echo.

This sparked a week of continued news coverage last week from across the country, including the national BBC news, The Independent, Metro, The Telegraph, The Mirror and many more regional newspapers. Director of Research at Food Active Robin Ireland was also invited to speak about the arrival of the Coca Cola truck in Liverpool on radio shows across the country, including BBC Radio Wales and Leeds Hack Radio.

The sole purpose of the Coca Cola truck is promote their brand and products. Coke claim they do not market their products at children – however, allowing this truck into our towns and cities is allowing just that and in essence promoting products which are heavily linked to obesity, type 2 diabetes and many other non-communicable diseases.

As such, a symbol of ill health should not be welcomed nor celebrated within our communities during a season of good will and cheer.

Food Active links up with Sugar Smart this Christmas

tmas, Food Active wrote a letter to local and national news outlets, with over 100 signatories opposing the arrival of the Coca Cola truck – including five Directors of Public Health, Academics, GP’s and individuals from the World Obesity Forum and the President of the Faculty of Public Health. Yet, the news story was disappointingly not picked up by any newspapers. However, the letter was featured in the BMJ as a joint editorial from Food Active’s Director of Research, Robin Ireland, and Professor John Ashton. You can view this editorial here.

This year, we have joined up with Sugar Smart who have drafted up an open letter to Coca Cola putting forward the public health case to refuse such a visit from Coca Cola’s signature truck. Also in the letter, Sugar Smart are requesting retailers to In using contacts from both Food Active and Sugar Smart, we hope the letter gains greater news coverage and attention from councillors which may lead to more responsible marketing next Christmas period.

Food Active sent a letter to all commissioners in the North West and the four local authorities in the North West the truck is visiting in November/December, raising concerns about the visit and recommendations for more responsible marketing.

Out of the 40 organisations representing 27 cities and local areas, the North West made up over 25% of this with over 15 signatures from Directors of Public Health, Council Leads, Health and Wellbeing Boards, CCG Chairs and Portfolio Holders from Blackpool, Cumbria, Halton, Knowsley, Liverpool, Rochdale and Sefton Council.

“We’re encouraging local authorities to have conversations about how marketing campaigns like this involving free sugary drinks is compatible with bringing down concerning rates of obesity and dental decay in children.

The link between childhood obesity and deprivation is well established and it’s important to note the truck will be visiting some of our poorest areas.”

Follow Food Active and SUGAR SMART on social media to get the latest news and updates. Twitter: @food_active / @sugarsmartuk and join in the conversation at #CavitiesAreComing #HolidaysAreComing