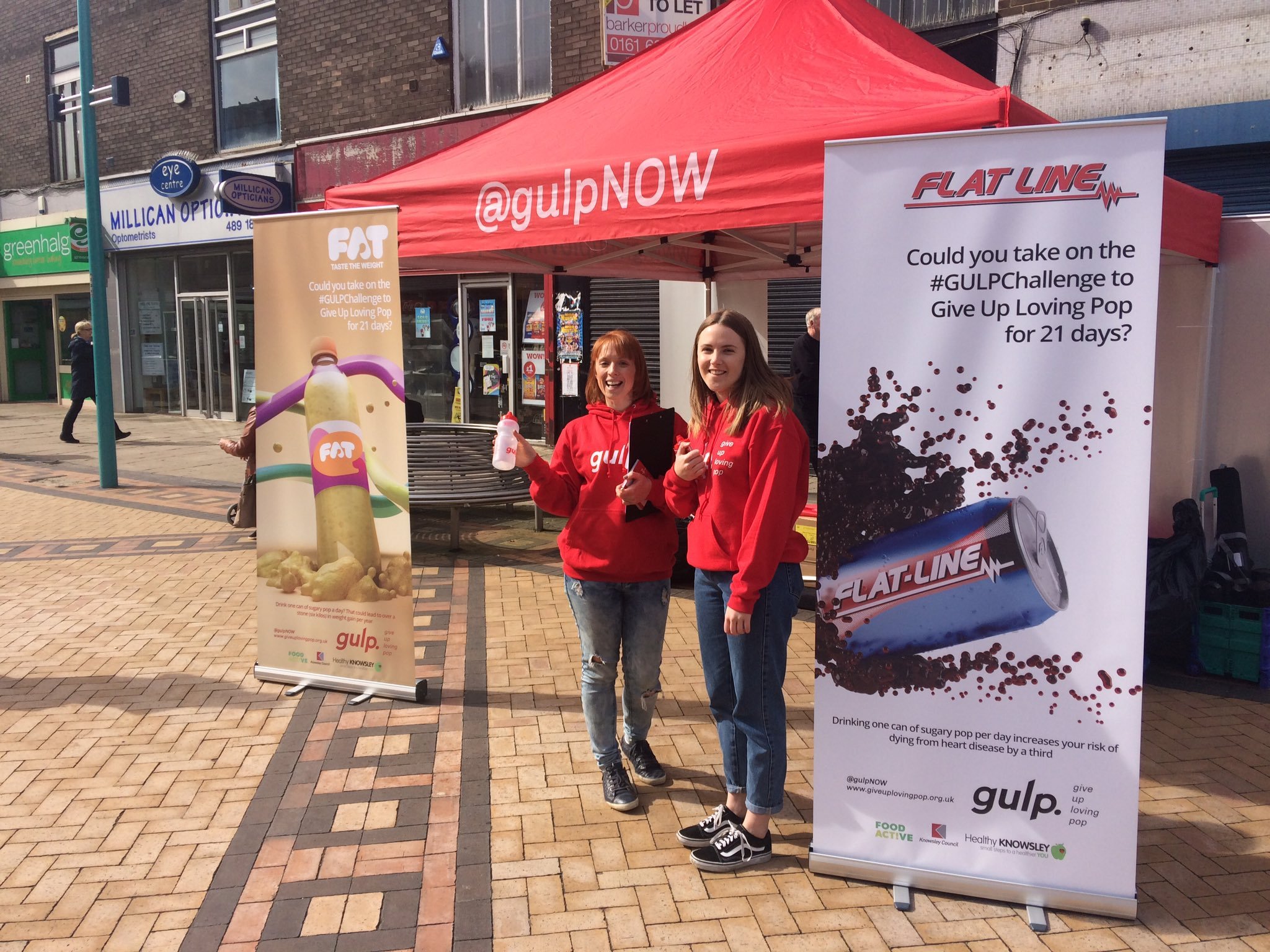 Throughout April, I was delighted to represent Food Active as a member of the GULP Street Team. Knowsley Council commissioned Food Active to host roadshows at several locations within the borough. We visited Huyton, Kirkby, Whiston Hospital, Prescot, Stockbridge Village, Halewood and Knowsley Community College. Representatives from Healthy Knowsley also attended the roadshows, which worked very well as residents could be signposted towards additional support services regarding their diet and health.

The overall response from Knowsley residents was fantastic. People were intrigued by the posters and bright colours of the gazeebo, which meant more often than not people came up and spoke to us, as opposed to the other way round. In many locations, we barely had to roam from the gazeebo to chat with residents.

What was really positive and promising to see, was the sheer number of residents who said they had already given up sugary drinks or were trying to cut down on their consumption. Many said they had given them up for the New Year or for Lent, claiming that they would never go back to regularly consuming sugary drinks and were now encouraging other family members to do the same. Furthermore, many residents said it was a great campaign which was really needed in today’s society, particularly in school aged children who they often see guzzling sugary drinks in, around and after school.

We tried to emphasise the importance of replacing sugary drinks with water, as countless residents admitted that they barely drank any water. Hence, many were really pleased with their free GULP water bottle which would help them towards consuming more water when they are out and about. Everyone we spoke to knew the dangers of sugary drinks, and whilst some were adamant they couldn’t live without them the majority were enthusiastic and optimistic about trying the 3 week challenge, given the potential benefits to health. Moreover, the leaflets, postcards and discussions had gave residents the knowledge and the confidence about completing the GULP challenge.

However, some of the more startling conversations we had were about the quantity of sugar drinks some were consuming. One claimed they drank 4 litres of sugary drinks daily. Some mothers said their children would get withdrawal symptoms if they go for too long without one. More worryingly, a vast number of people we spoke to said that they had either just been diagnosed with type 2 diabetes or were borderline diabetic. Whilst the majority knew sugary drinks were bad for their health, many continued to consume them on a regular basis, citing energy and taste as their reasons. Thus, indicating the need for a campaign such as GULP reaching out into the community. Interacting and engaging with the community is a great way to get people thinking twice about their lifestyle and choices in regards to their health.

Good luck to all the Knowsley residents, schools and organisations who pledged to the GULP Challenge, who are now into the last week of the 3-week challenge!