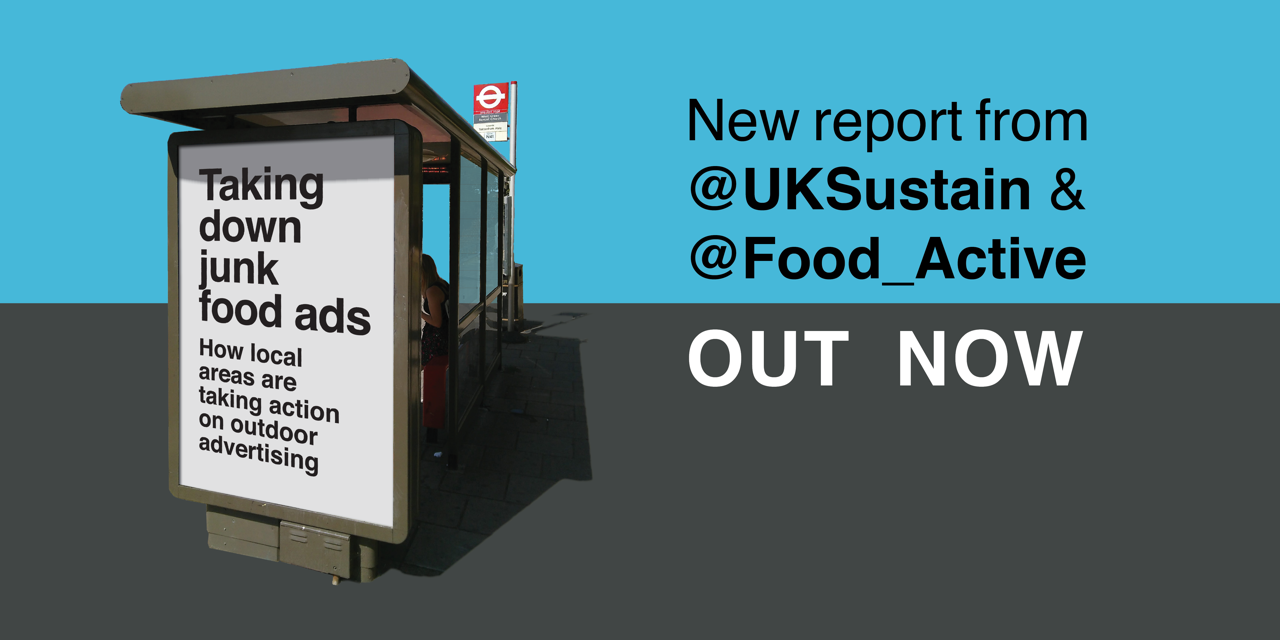 Our new joint report with Sustain, ‘Taking down junk food ads: How local areas are taking action on outdoor advertising’, uncovers the limited powers that local authorities have to restrict advertising of products high in fat, sugar and salt.

Tackling junk food advertising has never been higher up the agenda. Set against a backdrop of an increasing burden of diet related
disease on individuals and society as a whole, everyone from national government, local authorities, businesses, charities and fundamentally, citizens, have accepted the need to increase the scale and impact of action commensurate to tackling the problem. Beyond the important attention being paid to online and broadcast advertising, promotions and packaging, the appetite to tackle physical advertising at a local level has rocketed.

Over the second half of 2018, Food Active, Sustain and representatives from over 30 local areas around the UK to pull together examples of advertising of products high in fat, salt and/or sugar from across the UK, exploring what powers they had to restrict these adverts. By reaching out to local authorities and food partnerships in the Sustainable Food Cities network, they explored what powers local people had to reduce advertising in their area which promoted less healthy food i.e. food categorised as high in fat, salt and/or sugar (HFSS) according to the Department of Health’s Nutrient Profiling Model

Today, published in our joint report (available to download at the bottom of this article) with Sustain illustrates that local authorities have little powers to restrict advertising of food and drink high in fat, sugar and salt – despite the fact that many areas are struggling with high levels of childhood overweight and obesity.

“This research has highlighted the limited powers that local government has to restrict junk food advertising. Nationally the government has accepted the need to limit advertising of products high in fat, salt and/or sugar, particularly where viewed by children and yet there are clear loopholes which need to be closed. The Advertising Standards Authority refuses to consider junk food adverts outside many settings used by children such as nurseries to be in breach of current rules. And the only real repercussions for companies that break these rules amount to little more than a slap on the wrist, with many complaints being ruled on long after the advertising campaigns have ended.”

The reports makes 9 recommendations which include:

“To the uninitiated it may appear that local authorities are sending out mixed messages by trying to tackle child obesity and yet still allowing these adverts to proliferate. This work has shown the difficulties that local authorities face and highlights the need for much stronger powers to both prevent and to order the immediate removal of adverts for products high in fat, salt and/or sugar in areas with high rates of child obesity.”

“The Mayor of London’s ground-breaking healthier food advertising policy across the Transport for London network has paved the way for other local authorities. We’ve had lots of local areas approaching us looking to adopt this for their own council’s advertising spaces which is brilliant – with Haringey being the first, starting this July.” [4]

Middlesbrough and Lewisham are both in the running to be one of the Government’s childhood obesity trailblazers, and if successful would focus on implementing further restrictions to junk food advertising in their areas [5].

To read the recommendations and full report, follow the button below.