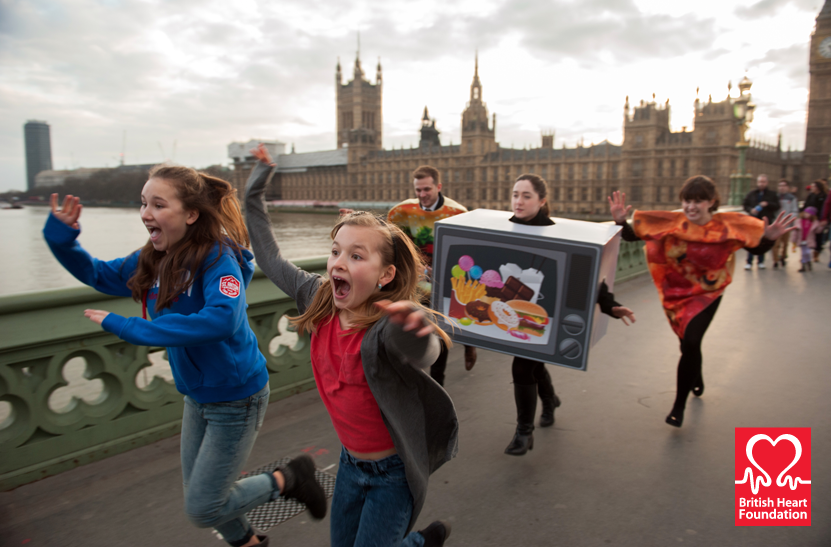 New statistics show the majority of UK parents believe stopping children being exposed to junk food adverts could cut childhood obesity, as the British Heart Foundation (BHF) delivered a 30,000 strong petition to ban the adverts before 9pm to Britain’s most famous street.

The BHF polled 2,000 UK parents and found 60% of parents believe that stopping children being exposed to junk food adverts could help towards tackling the obesity crisis in children.

Almost seven in ten (69%) parents polled feel the UK Government should introduce stricter regulations on the food industry to better control how junk food is advertised to children.

Six in ten parents (60%) say that adverts promoting foods that are high in saturated fat, salt and sugar affect what their children want to eat. Well over half (58%) say junk food adverts make it harder for them to say no to their children or get them to eat healthily.

Around 30% of children in the UK are overweight or obese, increasing their risk of being overweight and developing coronary heart disease in later life. Research by The Food Standards Agency has found that TV marketing of food and drink products can influence children’s food preferences.

Yet loopholes in the UK regulatory system mean that junk food adverts which are banned during children’s programming can still be shown during family programming, such as X-Factor, when children’s TV viewing peaks.

More than 30,000 people have backed the BHF’s call for the Government to ban junk food adverts being shown before the 9pm watershed.

The nation’s heart charity took the petition to 10 Downing Street and urged the Government to take action to tighten advertising regulations and protect children.

“Over 30,000 people have backed our campaign to ban these adverts before the 9pm watershed.”

“By protecting young people against the sophisticated marketing techniques of junk food advertisers we can help tackle the obesity crisis which threatens the heart health of future generations.”

“We urge the UK Government to heed the public’s clear call and take immediate action.”

Click here to find out more about the campaign.